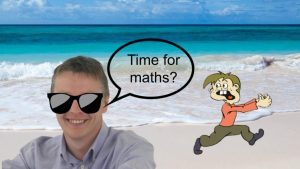 It seems that barely a year goes by without a raft of telephone calls – usually around January – as clearly worried parents call to arrange tutoring. And that’s not all. Sometimes the second part of the conversation is accompanied by the flat statement ‘and he failed his mocks.’

Where do we go from here? Is it just a case of arranging some tutoring, ‘pushing him,’ and everything will fall into place? Arrange a weekly visit, start from a base level, talk about ‘it’s a bit of a journey?’

The reality is that, for many students, maths is just evil. Sitting in a classroom surrounded by brightly coloured percentage emoji’s proclaiming that ‘everything is 100% cool,’ is not a fun day out. There is a faint feeling of desperation, like some long forgotten fairground, creaking and weathered as it relives the glory days of a thousand happy families. Ah don’t you just love a simile.

Unfortunately, for some students, maths is difficult. But not impossible. A fail doesn’t necessarily mean that they’ll get the same result in the actual GCSE’s. It’s really a matter of perspective and focus:

Bad day? We all have them.
Nearly a grade 3? You’re on your way.
No revision? Start now.
Feeling rough? You’ll be fine.
Distracted by your mate? Sit somewhere else.

While all of these could be reasons, unfortunately you still need to pass. Sorry. There’s a brilliant quotation along the lines of “Everybody is a genius, but if you judge a fish by the ability to climb a tree, it will live its whole life believing that it is stupid,” that our leaders would do well to take note of. The current education system still pushes ‘success’ as maths & English grades …. and, grrr, …. if I was in charge …. maybe for another day.

Anyway, after a soothing cup of tea, it’s time to get back on track. Passing GCSE from a fail in a mock is challenging, although it can be done. Whether you employ a tutor, look for online support, or talk to the teacher, there’s always a chance that things will work out. So here’s some real practical tips, to help you make the very most of the next few months:

Ask questions.
One of my most successful students went from a fairly low expectation, to a pretty good pass. But drove me insane in the process.

She just didn’t give up. Day or night, there would be a WhatsApp message with a picture of a question, and a large ? Initially that was it, but … interestingly …. over a period of time, the pictures became a little more worked on. Small buds of calculations began to sprout up in the corner, the occasional sketch, a few dots here and there. It was like the first few weeks of spring.

Also, the questions became more sophisticated. Rather than a couple of fractions, it became a ratio, or a bar chart morphed into a timeline. Either way it was exciting to see knowledge, and confidence, developing in a student who really thought she was going to fail. All from asking questions, and being single minded enough to make sure there was an answer.

Write the formula – every time
My maths teacher was a small wide-set man that looked a little like the old fella in the film ‘Up.’ Although, in complete opposition to the world weary grumpiness of our hero, my maths teacher was a complete nutter. Much given to bouts of fury, if a small boy dared to not ‘write down the page.’ One look through his thick glasses was more than enough to send even the sturdiest pupil, into an absolutely focussed state of concentration.

But he got us all through. Failure wasn’t an option – far too scary.

Dr F’s philosophy was simple, and he only had two rules:
Work down the page and,
always, always, always write the formula, every time.

There’s two reasons for this. One is the often quoted ‘you might get a mark,’ the other, is more about a sense of direction. Just knowing that the answer involves speed = distance / time can make your work a little more focussed. On some occasions, it might be all that you need to answer the question correctly. Either way, writing a formula can point you in the right direction, provide a target, encourage you to lay out your work correctly, stop you from over calculating, and make you look like a hero.

A well presented answer, even if incorrect, can still gain marks. Of course, you also need to learn the formulas in the first place, and I’m sure there’s thousands of booklets available – either through your tutor, or online. Just lately the government has also been involved, and exam boards print some useful information at the front of the paper.

Stop watching videos
Gasp! Shock! Horror! For someone that has an active YouTube channel – and the amazing income that it supposedly provides, and the coolness of getting recognised in a post office queue – this doesn’t seem like the most ingenious of comments. After all yours truly posts regularly, writes loads of question papers, responds to comments and spends (literally) minutes crafting the most compelling story … very close to the Mr Beast level of awesomeness. OK, maybe the last bit isn’t really true.

So now I’ve got you with my clickbait title, what I really mean is stop passively watching videos. In other words:
Pause the video
Work through the question
Compare your solution

Apart from my own, there are some truly brilliant YouTube maths tutoring channels. Many are superbly presented, engaging, and work through problems using excellent techniques that are well explained. I’m a little envious sometimes.

Whatever your preference – and, of course, other tutoring providers apart from YouTube are available – it’s really about active watching. Take a pen and notepad, sit down, aim to do the first question, go from there. If you need any help, ask a question, write the formula, actively watch the video.

I absolutely promise that ten minutes of ‘active watching,’ is far better than ten hours of scrolling though. Even if the videos are those brilliant ones about dogs being rescued, or converting a van into a mansion, suitable for a family of eight.

Treat yourself
Our daughter loves crisps. Preferably those big scrunchy multipacks of quavers, much to the annoyance of her fellow cinema goers. With as much lip smacking relish as possible, Cas can wolf down at least a kilogram of crunchy, melty and pleasingly cheesy (I got that from the website) of the snacks.

Of course, in the interest of balance, the quavers are followed by a hearty portion of carrots, broccoli and cabbage. Or not.

Joking aside (she really does like broccoli), it’s important to reward yourself from time to time. The same applies to study. Anyone who seriously tries to go from a grade 1 to a pass, has definitely got my vote – and, to be honest, a big bag of crisps is a small price to pay.

However there’s one small caveat: you’ll notice that I used the word ‘reward.’ Whatever you prefer, the reward is the most important recognition of achieving something, and you should aim to sit back and enjoy. Absentmindedly munching on a carrot while you are tackling a factor tree, might look good in a Bugs Bunny cartoon, but it really should be the payment for working through.

Personally, although I like to spend money as much as anyone, it’s the small wins that matter. A sneakily nicked pack of Quavers (hope Cas doesn’t read this), can work wonders in creating a sense of achievement at a job well done.

That’s about it. The top four tips for exam success, without suggesting stuff like ‘find a quiet place,’ or ‘create some flashcards’ – these things will follow, as you settle into your new role as a studying superhero. But you know the most important thing? Me ‘n everyone else in Starbucks want you to do well, and with that level of support you’ll ace it. So, unless you really have discovered a brilliant van conversion video, start your studies now 🙂

Here's a couple of links to support your tutoring journey:

… and, if you'd like to hear from me on a fairly regular basis (usually each week), with hints, tips, ideas, thoughts and – especially – links to new posts, please subscribe using the link below: