Yeah, but who invented maths?

.. was one of my favourite questions this week. I’m not sure whether the student was just a little bored and wanted a diverting chat, or whether there was a genuine interest. Either way it did get me thinking about who invented maths.

A long time ago there lived a boy with an unpronounceable name. So we’ll call him Eric. He lived around 8,500 years ago during the ‘neolithic’ or new stone age period.

Eric didn’t know how old he was. But he was strong and clever, so his dad made him “Keeper of the Sheep.” It was quite an honour and much better than ‘pig watcher’ (that was Ug’s job) or ‘goat looker afterer’ (that was Ug Ug’s job).

Back then, children didn’t go to school, because school hadn’t been invented either. Not much had been invented, actually. Even history hadn’t really happened yet. Eric spent most of his day wondering around looking after his sheep, watching out for unwelcome visitors and generally trying to get on with life.

“Only one thing matters, son” said his father. ”When you come home, you must bring back all the sheep that you take out with you in the morning.” He didn’t really say it like that, it was perhaps something like “Ug, erg, ur, grrr, grrr, grrr, ig, og, grr”

His father had used a lot of ‘grrs’ so Eric was quite worried. Dad was trusting him with a very important part of the family’s wealth.

The problem was numbers hadn’t been invented yet so there was no way of counting them. Eric settled down to watch his sheep and hope that something would help with this particularly difficult problem. He was good at heart and really didn’t want to let his family down. 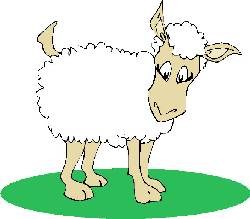 “I know,” he thought to himself, “I’ll give them all names, and then I’ll remember them.” He amused himself for hours giving them funny nicknames: Black Nostrils, Wonky Ear and Big Bottom were his favourites. But by the time he’d named the last sheep, he’d forgotten what he’d called the first one, even though it was hilarious.

Next day, Eric had the best idea in the history of the world (well, so far anyway). As his sheep filed out in the morning, he put one stone in his pouch for every sheep that went past him, and he did the same at dusk when he brought his sheep home.

If he used all his stones morning and night, he knew he hadn’t lost a sheep. Eric’s big idea spread throughout the lands.

Eventually stones were replaced with a tally system by scratching marks on a bone, and then clay. The Sumerians were good at this as they needed to keep track of all their sheep, goats and pigs. While today we have coins and notes, people living in the middle east developed a system of clay cones and pots.

These eventually became writing marks on clay tablets. The Sumerians might even have employed the world’s first accountants, and foiled some counterfeiters, as the system became more sophisticated.

Then the Egyptians – who were amazing at most things – figured that counting wasn’t enough and that they needed to create standard measurements. That’s a whole new article and I’ll be happy to talk about that at some point.

Unfortunately Eric didn’t know any of this, and it took a very long time for the concept of maths to spread. Sadly he never made any money from the idea, because money hadn’t been invented then either.

His dad was happy though.